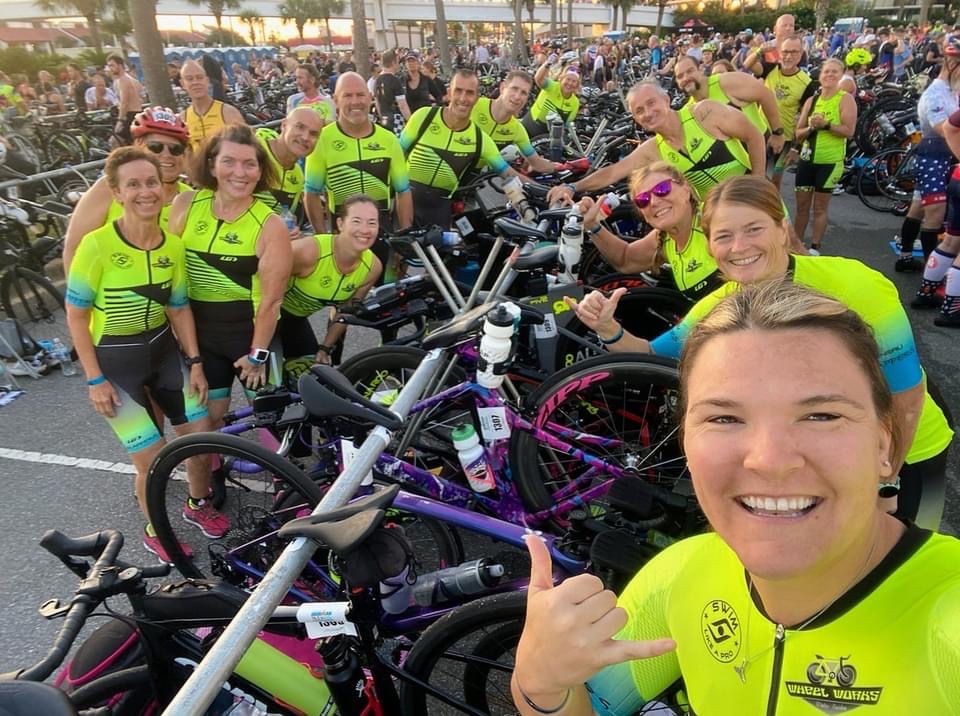 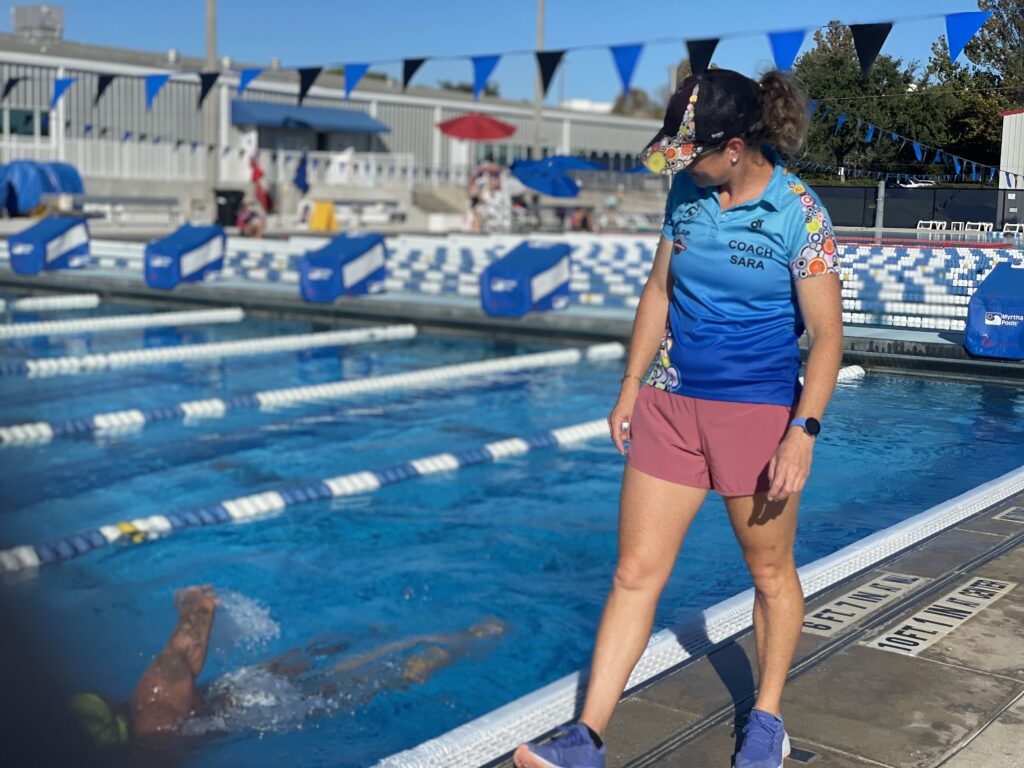 Swim Like A Pro started in 2013 with a passion for triathlon, swimming, adventure racing, swimrun, and so much more. It started as a niche program that focused on quality swim instruction for adults in Central Florida…and has grown into a nationally recognized endurance coaching organization.

Our coaching philosophy is rooted in longevity in the sport and creating a healthy lifestyle that can become a life-long passion. Whether you enter the sport with a “one and done” mindset or with a long term vision…we will fully support YOUR goals and help to make them a reality. Throughout the process, you will become part of the #SLAPPERS community where you will gain inspiration from others and hopefully inspire friends and family to “try a tri”.

The primary goal of SLAP is providing a path to success while ensuring that you enjoy the journey. We encourage a balance of family, work, and sport so you still have fun and enjoy competing in this sport for many years.

The SLAP coaches have participated, competed, and instructed at all levels of endurance sports. With this experience, SLAP aims to provide the highest quality of professional coaching for every athlete in our program.

We have multiple coaching accreditations, certifications, and years of education and experience in triathlon, swimming, and every other multi-sport event possible! We enjoy sharing our knowledge with beginners and experienced athletes alike to help everyone reach their goals in sport.

In training, our motto is to “Get comfortable with being uncomfortable.” It reminds us that success is never easy and simple to attain. The path to our goals is always going to have challenges…but when we take each hard workout as just one more step closer to our goals, we finally get to enjoy the journey.

You can find the #SLAPPERS representing the local SLAP Tri Team and accomplishing their personal goals at events throughout the country and around the world. Come join us, meet the amazing team, and let’s get started on accomplishing all your goals! 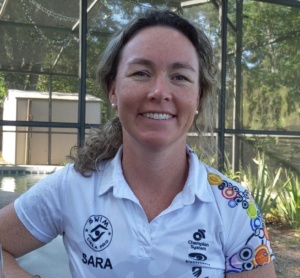 Creativity and passion are two words that best describe Sara’s coaching methods at group training or during private technique sessions. Her personal sporting career spanned 25 years of training and racing while representing the USA and winning medals at multiple World Championship events. She has competed in swimming, open water swimming, triathlon, aquathon, swim/run, lifesaving and adventure racing. After retiring from her personal career, Sara served as the Team Leader with the USA Triathlon Elite National team to the ITU World Triathlon Series Events. Today she focuses on traveling to local and national events with her athletes and the SLAP Tri Team to cheer and support from the sidelines.

You can find all of Sara’s articles in Triathlete Magazine by clicking here.

Learn more about Coach Sara McLarty with a Q&A here… 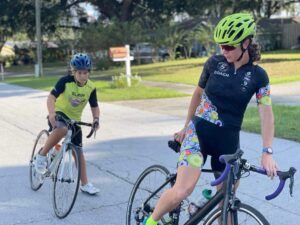 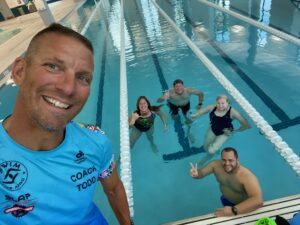 Todd Shellenberger is a coach with over 10 years of coaching experience and over 30 years of racing experience. As part of keeping these coaching certifications, he is always reading and learning about what’s new in the sport and in each of the disciplines. In a former life, Todd was a Certified Public Accountant and was CFO of a not-for-profit organization.

With over 30 years of experience and over 140 races under his belt Todd can relate to all types of athletes as well as help direct athletes to races that suit their strengths and offer the best experience possible for the racers and their families. 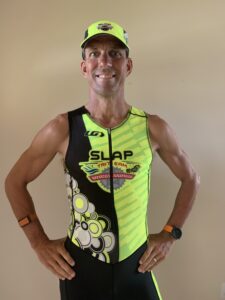 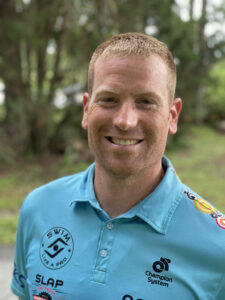 We are excited to welcome Kris & the Koepp Family to Central Florida from the cold winter of Minnesota! Kris ran a very successful youth triathlon program in Rochester and produced National Champion athletes! All of our athletes will benefit from the knowledge and expertise that Kris brings to the team. 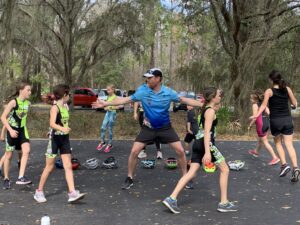 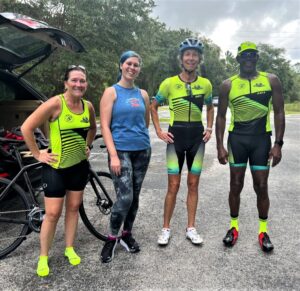 Beth is a life-long sports enthusiast. As a pre-Title IX collegiate athlete with few opportunities to compete, Beth is thrilled with the being able to compete as an older age-group woman. After 30+ years working in the US Government, she took on triathlon at 50 years old on a bet from her triathlete brother, and fell in love with multi-sport.

She has been coaching triathlon and swimming since 2009, including two years as an NCAA Women’s Triathlon Coach. She met her Sports Scientist/Pro-Squash Player/Master Bike Fitter husband. Doug Baumgarten, in 2005 and they ran a triathlon equipment & coaching/athlete performance lab in Virginia from 2009 until 2022. They sold the business and moved to Florida for sunshine and the #SLAPPERS! 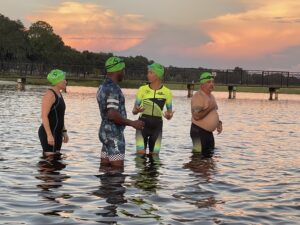 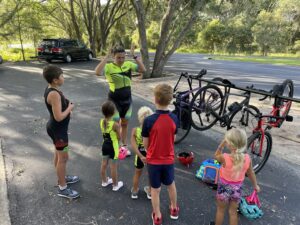 Coach Michelle is a fantastic and patient teacher with the #miniSLAPPERS. She has been a huge asset to the team since starting in 2019. Her coaching passion is the development of youth and adult athletes with the sport of triathlon and swimming.

Michelle serves as one of our amazing Youth Team coaches on the weekends and at local races. Her background in triathlon and CrossFit bring constantly changing workouts that are challenging and fun! 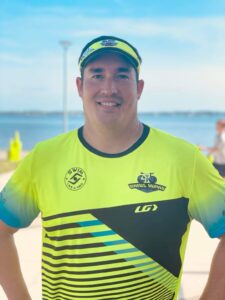 Omar is a swimming enthusiast who sees triathlon as a lifestyle.  He discovered  triathlon while swimming in the USA Masters league.

Omar and his triathlon-loving-family relocated to Florida in 2022 to be closer to his family in Puerto Rico. They wanted to live in Clermont due to it’s “Top Tri Towns” recognition. While searching for a Masters Swimming team, he and his wife came across SLAP and the family fell in love with the team.

Omar has been competing in triathlons since 2010 and has completed many events, including several full Ironmans and 70.3 distance races. He assisted in coaching his triathlon team back in Puerto Rico for many years, and since then, he has developed a special interest in teaching and mentoring.

Fun fact: Because Omar loves teaching about his passions, he also became a certified motorcycle coach a few years back! 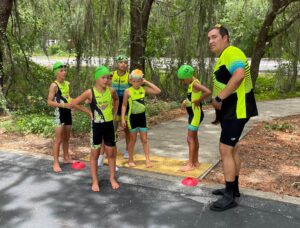 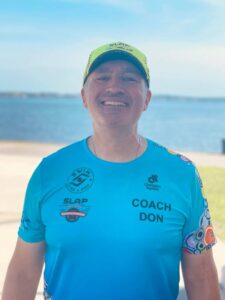 Coach Don’s philosophy – “If your dreams do not make you uncomfortable- they are not big enough…challenge yourself to be the best TODAY!”

Coach Don’s final thought – When looking at the results, the only one that matters is DNS (Did Not Start

). You don’t have to be great to start, but you have to start to be great. 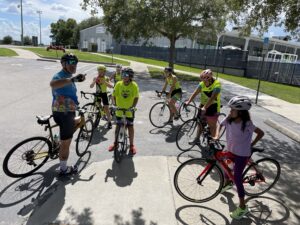 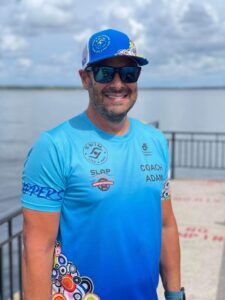 Adam is a lifelong swimmer that is eager to share his knowledge and experience with the SLAP family. He believes training should be fun as well as challenging and the fun is what keeps people coming back to SLAP. 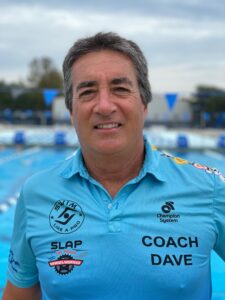 Coach Dave’s 30 years of professional swim and triathlon coaching experience spans several countries (New Zealand, Australia, Canada, and the USA). He has coached swimmers and triathletes of all ages and abilities from learn-to-swim/learn-to-tri to age groupers to Olympians!

Dave has worked as a SLAP swim coach since 2020 during the winter months when he and his wife, the amazing Lisa Bentley, are visiting for six months from Canada. 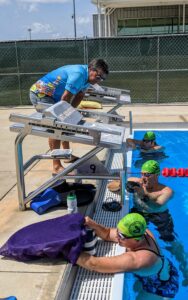 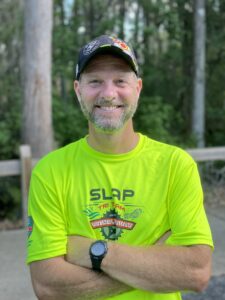 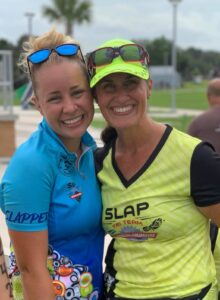 As a mom of 3, Amanda has learned how important an active lifestyle is to her mental, emotional, physical, and spiritual wellness. A true local to the Clermont/Minneola area from birth, she is so happy that she & her husband are raising their children here, ages 7, 11, and 14. She finds such joy in cheering others along as they work hard to pursue their goals! 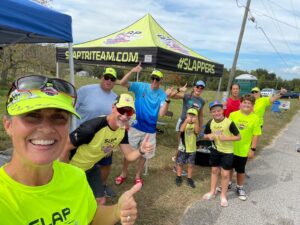 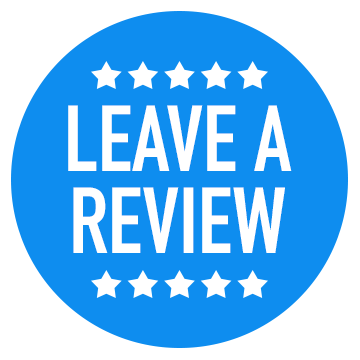 The SLAP team is an awesome group of people- everyone was so friendly and helpful I hardly felt like a newby!

Working with Sara was the best! She has so much knowledge on triathlon and she helped me with my swim like no one has before!

Very grateful to have the opportunity to work with her.

Making the commitment to sign-up for the Try-A-Tri program was exactly what I needed to learn how to properly prepare for a Sprint Triathlon. Getting past my anxiety in open water swims, training accountability, and encouragement from other athletes were the biggest “take aways” for me personally. Coach Beth was absolutely amazing! She encouraged me to challenge myself and pushed me in subtle ways at every practice. Coach Sara encouraged me to finish strong at swim practice and I always left each session feeling accomplished. Her coaching style helped elevate my anxiety in open water practices by moving at a pace with which I was comfortable and she always asked about my comfort level before adding a new drill. On race day, I felt confident and physically prepared. The support from Coach Beth, Coach Sara and the #SLAPPERS made the entire experience awesome!

I’m looking for someone to guide me how can I prepare myself for next year to do a triathlon.

Joining SLAP is an investment in yourself

As an age group athlete I have always just put the miles into training and finished my races satisfied with my times. I finally decided I needed to learn to swim better. I took some lessons from Coach Sara and joined the SLAP Tri Team. Not only did my swim improve but also my motivation to train. I then asked Sara to coach me for a race the following year. I now get weekly training schedules that are structured and keep me on track to have my best race possible. I can see measurable improvements in my run, bike and swim. There are no junk miles. All workouts have a purpose. Not only am I confident that I am going to have a great race but I have learned how to train my body for future races. Joining SLAP will be the best investment you make both financially and physically.

This Group will Change Your Life!!

The SLAP team and coaches are amazing and encouraging. The team workouts are always fun. As someone who did not know how to swim a year ago and was afraid of the water, thanks to SLAP I am now comfortable in the water and consider myself a decent swimmer, who still has a lot to learn 🙂